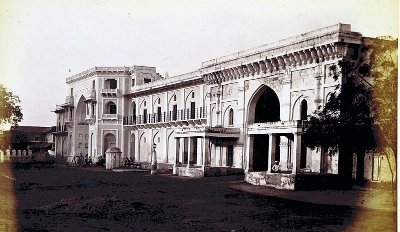 Mughal architecture developed under the Mughals in the 16th, 17th and 18th centuries when they build and extended their empire in the Indian subcontinent. It was an amalagation of Islamic, Persian, Turkish and Indian architecture.

Monuments in Ahmedabad, like the palace in Shahibaug, Azam Khan's sarai, Sujat Khan's mosque, and the tomb of Nawab Sardar Khan are among the major monuments representing Mughal architecture in Gujarat. Mnay other such Mughal monuments are seen across the state of Gujarat.

Mughal buildings have a uniform pattern of structure and character, which includes large bulbous domes, slender minarets at the corners, massive halls, large vaulted gateways and delicate ornamentation throughout.