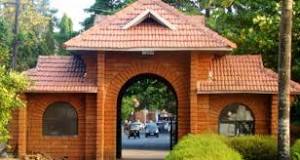 Mananchira was built as a bathing pool by the Zamorin Mana Vikrama, the feudal ruler of Kozhikode in around the 14th century. The laterite obtained from excavating the pond was used to construct two palaces to the east and west.

In the late 19th century, Calicut's municipal council decreed that the pond was to be reserved exclusively for drinking purposes, and prohibited its use for bathing, washing and recreational activities—a ruling that has remained in place ever since. The pond is an important source of drinking water for Kozhikode, but is susceptible to pollution from municipal sewage, domestic waste, and pollutants from nearby textile factories. An analysis of the water in 2000 by scientists from the Central Water Analysis Laboratory and Pondicherry Central University found that the pond was particularly bacteriologically contaminated during the monsoon season, and was highly alkaline afterwards.